In a lot of video games, raycasting is often an efficient solution to detect the player from an AI. But the player is often partially occluded, and then a simple raycast is not enough. A solution could be to perform several raycasts on the player bounds, but this is quite limited and can be tricky depending on the gameplay. Also, we often just have to know if the player is visible or not, but sometimes we need to know how much of the vision space the player visibility takes. An idea that has been given to me is to use a shader to detect the player, the AI perform the detection in a similar way the human player do: having a rendered image and trying to detect the target reading the pixels.

The subject I will explain today is a personal try, there is probably a better way to achieve this but I will try to explain a possible solution to achieve this. I will speak about Unity features I used to achieve this, but it is not Unity dependant, this idea is quite general and can be adapted to others game engines.

Giving vision to our AI

First, our AI needs a camera to get a rendered image. The idea is to perform 2 rendering: one for the environement, and the second for the player. Of course, we need to save our renderings into textures. At this step, comparing the 2 textures to detect the player pixels visible by our AI seems to be pretty difficult: that's because we missed a crucial point. We don't need to render human readable textures, with the same graphics as the human player see on the screen. We need to render textures having informations that can be interpreted by our code: the pixel depth. Instead of rendering the final pixel color for each pixel of the texture, we write the pixel depth for each pixel of the texture: that will be quite simple to compare the pixels depth of the 2 textures to determine if each of the player pixel is occluded or visible. Using Unity, you can ask a camera to render with a replacement shader. The idea is to use a custom shader to render objects instead of their original shaders. We have 2 methods for this: Camera.RenderWithShader and Camera.SetReplacementShader. For more info about replacement shader on Unity you can read the Unity manual or watch this pretty good video. 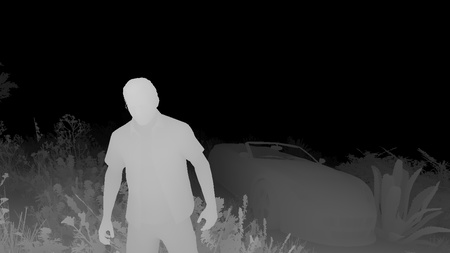 An example of pixel depth rendering

To compare our 2 textures there will be some work to do. We could read the textures pixel by pixel in the game code, using the Unity Texture2D.GetPixels32 method but it would take too much time to read the textures using the CPU. As we are in a real-time program, milliseconds  are the sinews of war, so CPU approach is not a solution. We have to do it using the GPU, because while the CPU executes our game logic, the GPU is fairly quiet, but also because the GPU loves parallelization. Using our GPU while the CPU is executing the game logic for the current frame is one thing, but using multithreading on the GPU (GPU are made to operate in this way) in addition is just heaven.
To achieve this we will use Compute Shaders. Compute shaders are shaders used to perform calculations on the GPU instead of the CPU. What we will need is of course a compute shader, and also a compute buffer. The compute buffer allow us to share data between CPU memory and GPU memory, so we can access to compute shader data using compute buffers. To learn more about compute shaders on Unity, a start point could be the Unity manual or this post if your are not familiar with compute shaders, or this one (very well explained but in french).

On the CPU side, we should have something like this:

Let's see what my compute shader does:

The first thing to know is this compute shader is dispatched as one thread per pixel.Secondly, if we want to avoid branching, we have to deal with arithmetic, using here the step function. Step(y, x) returns 1 if x >= y, otherwise 0. Here, the idea is just to check if the pixel or the player texture has a lower depth than the pixel of the enviro texture. You will notice I checked the case we have a black pixel, meaning there is nothing to render at this pixel, in practice it doesn't happen, but for testing purpose you can have quite empty scene, and not testing this cases will return a wrong result.
You can aslo notice the InterlockedAdd function, I increment a int var in my buffer when a player pixel is visible, using a guarented atomic add function to avoid race condition.


Getting the compute shader result

Now we dispatched our compute shader using one thread per texture pixel, we need to get the result from CPU side. To do this, compute buffer class has a method GetData<T>(Array data), and that's all if you are using Unity 2017 or later. The problem with this method is you can't fetch data asynchronously. As the method work in a synchrnous way, the method causes your CPU to wait the shader finished and the memory to be accessible, causing a huge CPU stall (in my case it can takes 1 ms as 7 ms in some cases). Finally, the interest of using GPU is quite limited as the CPU has to wait the GPU, the parellelization is not very efficient.
The key is to use an asynchronous request, but if your are using Unity 2017, the unity API doesn't provide any method to perform this request in an async way. However, Unity 2018 provides a new feature called AsyncGPUReadback (note that only the 2018.2, the last version when I wrote this post, has this feature in the released API, for 2018.1 you have to search it in the experimental namespace of the Unity rendering API). The idea is to use a request and to wait for request done to get the data.

If we look at the previous code, there is only a few lines of code to manage this:


Determining how much space player takes in AI vision

As I said in the intro, this way is not necessarily the better way to achieve this, but it's a working way I experimented only supposing how to do it. If you get any better solution, or some corrections, don't hesitate to share ;)

This is the Unity project I done to experiment this, ZQSD keys to move your character, and left control / space to crouch, that's usefull to test occlusion. You have some AIs and a minimal level design on the showcase scene, enjoy it.

Popular posts from this blog 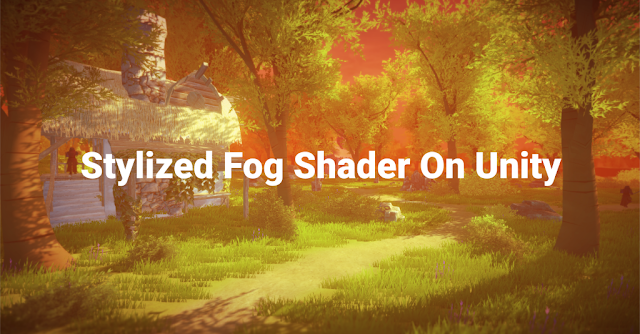 I wrote a simple shader for Unity to make a stylized fog like Fire Watch's fog. The idea is to get a pixel on the texture depending on the pixel depth, if the fog is near, a pixel on the left on the texture uv will be picked, if the fog is far, a pixel on the right on the texture uv will be picked. Features Choose between a linear fog and an exponential fog Choose between a simple color or a texture Screenshots Video Source Code Image Effect Version (Unity 2017 and older if not using Stack) [+] Shader Shader "Hidden/Shader_StylizedFog" { Properties { _MainTex("Texture", 2D) = "white" {} _FogColor("Fog Color", Color) = (1, 1, 1, 1) _UseStylizedFogTexture("Use Stylized Fog Texture", Int) = 0 _StylizedFogTexture("Stylized Fog Texture", 2D) = "white" {} _FogMinDistance("Fog Min Distance", Float) = 0 _FogMaxDistance("Fog Max Distance",
Read more

Today, I'll show you a good exercise I made to manipulate quaternions. In extra you got a 3C structure for a flight game. I chose to make a flight behavior because of rotation complexity. Today we always use physics to drive vehicles in video games, but this exercise is focused on quaternions manipulations, so all the behavior is driven by quaternions. Main Features: - Smooth TPS camera - Camera switch (FPS / TPS) - Auto replace character rotation: 3 different ways to smoothly reset character rotation (All Axis, Per Axis, None) Video Controls: - Z/S: pitch - Q/D: roll - Shift: boost - Left click / Right click: dodge left / right (lateral movement with roll as in some Star Wars video games) Download: - Download Windows standalone - Download Unity project
Read more

This is a post process material I've done on Unreal 4 on my free time. To make this rendering, this is what I did: Post process material must be rendered before tone mapping to get "hard edge" on light radius attenuation Original image is desaturated to black and white Color masking, here color close enough to red is excluded from desaturation Image tresholding to keep pixels of a luminance under a predefined step black, the others become white Outline effect Sobel operator used to detect edges Keep only hard enough edge using tresholding again Edges lit by a light are blacks, others are white
Read more